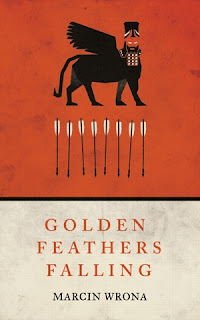 Alit was no stranger to the city after dark. She knew where the worst dangers could be found and how to evade them, and could run far and fast. When escape proved impossible, she was perfectly willing to strike with the iron pin that held back her hair. It had already been bloodied, once, inside a too-insistent hand.


Such thoughts always came when deliveries took her far away from the tablet house. They were a litany, a preparation for very real possibilities. Alit had been orphaned by murder. She had no illusions about what the gods could bring down in their ugly moments.
Marcin Wrona is at it again.

I recommended Pale Queen's Courtyard before.  It's beautifully written and full of action and general coolness, and I still recommend it.  Now he's followed it up with Golden Feathers Falling, another book set in the same world.  It's not exactly a sequel, and you'll have no trouble with Golden Feathers if you haven't read Pale Queen's Courtyard.  Golden Feathers is an adventure story set in ancient Mesopotamia, and it has the same top-notch writing and pulse-pounding action.  Here is the author's description:

By night, Alit wards off clumsy advances from boring scribes and functionaries. By day, she carries letters across dangerous Numush to add coins to her dowry. After her tablet house is attacked, she hires a band of mercenaries to find out why, and is drawn into an Ekka she has only glimpsed: a land built on vengeance, crime for coin, and simmering revolution.