You meet the most interesting people in this line of work - at least, for sufficiently broad definitions of "meet" and "work."  Today I'm pleased to present J. A. Beard, who has just released The Emerald City, a young adult urban fantasy novel set in Seattle.  It's clever, engaging, and thoroughly original, but it's also a fascinating re-framing of The Wizard of Oz.

Today's guest post is from Mr. Beard, who shares his insights into the changing nature of fantasy worlds.  Take it away, J. A.: 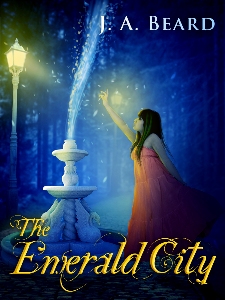 Our World versus Their World
In the past, there was far less separation between the idea of “our” world and the world of the fantastical. Storytellers would spin tales about creatures traveling around the outskirts of humanity, distant lands, or even the past, but there typically was less a sense that the magical world was something discrete and forever disconnected from the mundane “real” world.
Some of this was because our worldview was different. The magical world, for many people in the past, was the real world. A story about creatures that eat children who stray too far from home may have served a useful social purpose, but many people did legitimately fear creatures in untamed lands bordering their villages and cities. A lack of understanding of the forces of nature in many societies often manifested in the elevation of practitioners of what we’d now consider mystical arts.
The government of ancient Heian Japan, for instance, had an entire government department staffed with onmyoji, a group of men we’d classify as mystics and diviners. These were not priests. The ancient Japanese had plenty of Shinto and Buddhist priests. Onmyoji were professional “magical” bureaucrats. Magic was their science.
Slowly, though, humanity’s understanding of the world advanced. The dragons of ignorance fell before the blades of science and controlled observation. Where many ancients worshipped the moon as a deity, we’ve walked upon it. Magic has been forced to mostly retreat from our daily existence. People may accept many elements of the supernatural, but in most places a more rational non-magical worldview has settled in. Most people no longer fear ogres in the woods, vampires, shape-shifting foxes, or other sorts of supernatural beings.
Concurrent with the retreat of magic from daily existence, we saw the rise of fantasy as a distinct genre with its stories of magic, monsters, and heroes. Unlike earlier tales that included such elements, these types of stories typically were often not set on Earth, or if they were, would define their setting as some lost mythical age totally divorced from the present. There were exceptions, but in general fantasy became something associated not just with magic, but with different worlds.
This persists to this day. The gritty politics and betrayals in Westeros may have been inspired partially by the War of the Roses of our own world, but no one would ever mistake anything in the A Song of Fire and Ice series for Earth-based fantasy.
Even many stories that did establish a link to our world would quickly shuffle their characters off to somewhere completely fantastical and separate from our mundane little blue planet. Whether they are gritty struggles of brawn, epic magical adventures, whimsical explorations, or something else entirely, these second world fantasies have formed the basis of a rich canon. They allow complete escape into an all-encompassing adventure: new world, new creatures, new rules.
In recent years, the rise of contemporary and urban fantasy has challenged the dominance of second world fantasy. Of course, ever since the rise of fantasy as a true separate genre, there have been stories that inserted magic into a modern milieu, but they’ve typically been overshadowed by their second world cousins. Now, though, when one goes to the bookstore, they’re as likely to find a fantasy story set in a major modern city as they are in some country set in a different world and time. Vampires again lurk in the darkness, faeries in the forest, and the occasional fox does change shape. Mages battle in secret (or out in the open) for control of Earth.
Unlike the second world fantasies, contemporary and urban fantasies don’t allow a total escape. Sure, they do have creatures and new magical rules, but can an adventure of someone adventuring around, for example, Chicago ever capture the same feeling that comes with visiting somewhere totally new?
In a sense, the very familiarity of the world in such books produces a sense of wonder of its own. The tweaking of the familiar sets up a different but still satisfying exploration into the unknown. Whether it is the shadow worlds of settings where the supernatural is hidden to the twists on the modern where the supernatural creatures walk openly among us, the mere inclusion of these elements in our rational and oh-so-scientific world produces a new setting every bit as rich in unexpected possibility as any distant land.
As humanity continues to advance, change, and adapt, it’ll be interesting to see how our age-old interest in the supernatural continues to infuse itself into our fiction. Perhaps in a few decades, we’ll have a whole genre of fantasy taking place in domed lunar cities.
J.A. Beard likes to describe himself as a restless soul married to an equally restless soul. His two children are too young yet to discuss whether or not they are restless souls, but he’s betting on it. He likes to call himself the Pie Master, yet is too cowardly to prove his skills in an actual baking competition.
While writing is one of his great passions, science is another, and when he’s not writing or worrying about baking, he’s working on the completion of his PhD in microbiology.
He blogs at riftwatcher.blogspot.com and is on Twitter as @jabeard_rf.
His current release, a young adult urban fantasy, THE EMERALD CITY, doesn’t take place in Chicago, but it does have a lot of mystical action in the fine modern city of Seattle. It’s available for sale at Amazon, Barnes and Noble, and Smashwords.
Amazon: http://www.amazon.com/The-Emerald-City-ebook/dp/B00761LCTY/ref=sr_1_1?ie=UTF8&qid=1330061232&sr=8-1
Barnes and Noble: http://www.barnesandnoble.com/w/the-emerald-city-ja-beard/1108613536?ean=2940014100717&itm=1&usri=the+emerald+city+beard
Smashwords: http://www.smashwords.com/books/view/130023

Posted by Brent Nichols at 8:49 PM