Recommended Reading - A Dance of Cloaks

Buy A Dance of Cloaks 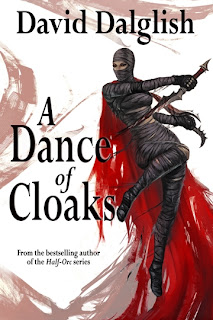 Don't get started on this trilogy if you have plans for the day.  These books are hard to put down.

David Dalglish has created a fascinating, complex world in this series, with characters who are complex, ambiguous, and evolving.  It's also crammed full of cool stuff.  Assassins.  Thieves.  Torture, poison, and betrayal.  Here is the author's description:

“I cut off his hand, yet he thanks me for not doing worse. That is the power you must one day command. Let them think every breath of theirs is a gift, not from the gods, but from you.”


----
Thren Felhorn is the greatest assassin of his time. Marshalling the thieves' guilds under his control, he declares war against the Trifect, an allegiance of wealthy and powerful nobles. His son, Aaron, has been groomed since birth to be his heir. Sent to kill the daughter of a priest, Aaron instead risks his own life to protect her from the wrath of his guild. In doing so, he glimpses a world beyond poison, daggers, and the iron control of his father.

A DANCE OF CLOAKS by David Dalglish


Assassin or protector; every choice has its consequences.

It is clear that Dalglish takes the profession of author seriously.  His writing is polished and assured.  Every element is handled well, from a fast-paced plot to elaborate, logical world creation, to characters who feel like real people and speak with distinctive voices.  He populates the book with familiar elements from the sword and sorcery genre, but most of it feels fresh and unpredictable.

The writing could benefit from a little bit of polishing.  There are some ambiguous pronouns and a few phrases that feel clumsy.  Overall, though, it is an excellent novel that will keep you turning pages.

Buy A Dance of Cloaks
Posted by Brent Nichols at 10:12 AM