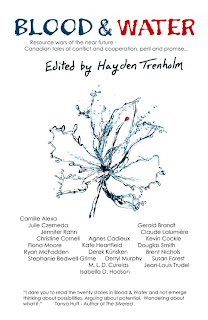 This week I get to bask in the reflected glory of no fewer than two different award nominations. The final ballot for the Aurora awards, the annual awards by the Canadian Science Fiction and Fantasy Association, was announced this week. While none of my humble tales were nominated directly, two different anthologies containing my stories are competing for Best Related Work - English.

Blood and Water from Bundoran Press is a collection of science fiction stories dealing with Canada's role in the conflicts that are sure to come in the near future as the world deals with the ramifications of global warming. It contains my story "The Great Divide," an adventure tale about an engineer who encounters some desperate people high in the Rocky Mountains, and a potential solution to a thorny problem. Check it out at http://www.bundoranpress.com/. 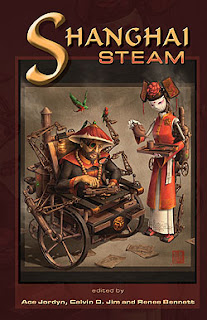 The other anthology to get the nod is Shanghai Steam, from Edge Press. Steampunk meets Kung Fu in a fun genre mashup that's just too cool to resist. "Meng Jie and the Coffee Maker of Doom" is a short, humorous tale of a bodyguard who can handle assassins and gangsters, but may have met his match when he has to brew coffee on the world's most advanced beverage maker.

Both anthologies are maddeningly difficult to buy. There is talk of an ebook version of Shanghai Steam, but it hasn't yet appeared. The paperback is available from Amazon. Blood and Water can be had from the Bundoran website, in dead tree format or as an ebook.

Another Aurora nomination went to Goblins, quite possibly the coolest web comic on the Internet. I'm a huge fan, and I recommend you check it out. It's hilarious, exciting, touching, and full of over-the-top gleeful mayhem. 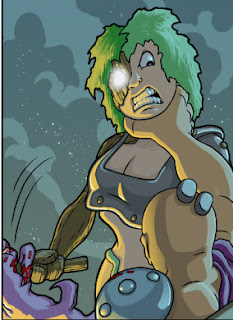 Posted by Brent Nichols at 8:30 PM No comments: