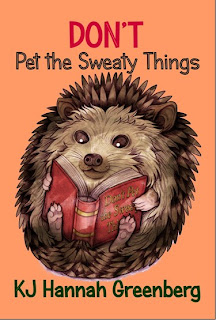 My theory that indie authors are some of the most interesting people around has been reinforced.  Today's guest post is from KJ Hannah Greenberg, whose Don't Pet the Sweaty Things is being released this week.  View it at http://www.bardsandsages.com/greenberg. Take it away, Hannah:

Today, I quelled three uprisings and decimated an entire outpost of spacelings. My occupational hazards, ranging from getting drunk on the particulars of integrating anthropomorphism into subject matter, to losing my cool when defining atomic boundaries, do little to interfere with the fun I am having.