Sir Waltir mac Donchie glared toward the center, half a mile away, where John Comyn's troops were in a writhing mass of disorder. Their own troops were eager for glory, shouting as they ranged themselves into lines. "I've done what I can, my lord," he said, "but they're still green as a spring meadow."

I blogged yesterday about A Kingdom's Cost, a terrific historical novel about Robert the Bruce and the fight for Scottish independence. Freedom's Sword is a prequel, another stirring story of historical adventure. Today I have an interview with the author, J. R. Tomlin. 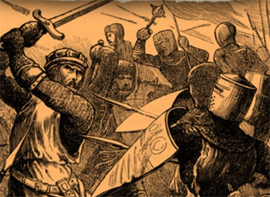 Do you have a writing process? If so can you please describe it?
Mainly just Butt-in-Chair. I don’t outline. Characters are generally lurking in the corner of my mind somewhere or stomping around demanding a story. If they’re fictional characters, I dump them into trouble and see what happens. If they are historical characters, I let them tell me their story.

Do you edit as you go or wait until you’ve finished?
I edit as I go. I tend to get into the story again by going over what I wrote the day before.

Do you hire a professional editor?
Yes, I have my novels edited and critiqued by beta readers.

Do you listen to music while you write? If yes, what gets the fingers tapping?
Depends on what I’m writing. I can’t listen to anything with lyrics while I write, but I listen to a wide variety, everything from the LotR soundtracks to Scottish folk music, Chopin to Tchaikovsky. It’s hard for me to write without music playing.

Did you submit your work to agents and publishers?
Yes. I went through the whole miserable, humiliating process. For a while, I was represented by an agent, as a matter of fact. I had a couple of novels published by small publishers as well.

Why did you go Indie?
I published several novels with small publishers, and then I signed with an agent who pitched one of my novels for a year.  It didn’t sell, and in the meantime, the whole indie thing started with the use of the Kindle and Nook burgeoning. I had these novels on my hard drive. I had to make a choice. I’d read what Joe Konrath was saying on his blog, read as Kris Rusch changed her mind, and watched Vicki Lieske have a tremendous success. Eventually, I felt it was the only logical step for me.

Any advice that you would like to give to others about becoming indie authors?
Read what Joe Konrath and Kris Rusch have to say. Talk to some indie writers at places like Kindleboards. Going indie isn’t for everyone. It is a lot of work. It’s not going down the easy road. But it is one of the most satisfying things I’ve ever done.