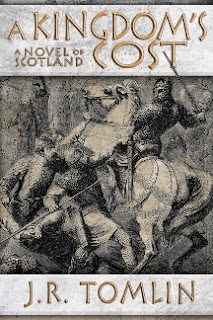 Read A Kingdom's Cost
James cradled his pounding head in his hands. He owed his father--something. Not vengeance. There wasn't enough vengeance in the world for what the English had done. But he'd at least get back what they'd stolen. Somehow, he'd do that. "I swear it," he whispered.

The year is 1300 and James Douglas is living in France, poaching deer and attending school.  When he loses his father to the wars between England and Scotland, he returns home to fight for Scotland's freedom.

Naturally things get worse.  He rallies behind William Wallace, then watches helplessly as Wallace is executed.  A new Scottish hero emerges in the form of Robert the Bruce, but the British hold Scotland in an iron fist and the Bruce is forced into hiding.  Meanwhile, the woman that James loves is imprisoned.

James becomes a cunning and ruthless guerrilla fighter.  Can the British ever be defeated?  Will James be captured and hanged?  Or, even worse, will he become as savage as those he fights against?

J. R. Tomlin has written a fascinating, layered, thoroughly entertaining historical novel about a violent and crucial slice of Scotland's history.  Packed with drama and adventure, written with skill and assurance, and true to the events of history, it's a novel I can recommend without reservations.
Read A Kingdom's Cost
Posted by Brent Nichols at 12:43 PM