Interview With the Vampire Author 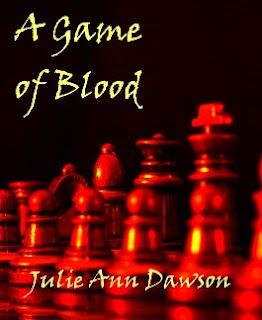 Today I have a special treat for you, an interview with Julie Dawson of Bards and Sages Publishing.  Julie has written a dark and riveting vampire novel called A Game of Blood.

You have a background in designing role-playing games.  How has this affected your writing?
I think what having a background in RPGs does is force you to think through your world building.  Even when you are setting stories in the real world, you are presenting your version of the world.  That means you have to make sure that all of the pieces fit together.  In RPGs, we call it game balance.  Game balance doesn’t mean all powers are created equal.  It means that no one power is so powerful that it fundamentally changes the world.  So if you think of the traditional fantasy world, you have mages that can throw fireballs from a hundred yards away.  That is a hugely powerful ability if left unchecked.  So it gets balanced out by the fact that there are usually some sort of restrictions on how many spells a mage can cast, either because they can only memorize X number of spells per day or because those spells pull from the mage’s own life force.  If you have priests that can cast resurrection on the dead, how does that impact the world?  Without something to restrict the use of the spell, death becomes a nuisance and nothing more.  So you require expensive components for the spell or say it has to be cast in a certain time period.
So you take those thought processes and you apply them to what you are writing.  In the modern world, if vampires existed, how would they keep their existence secret?  Why would they need to?  What entities or institutions would exist to challenge them?  What powers would they need to survive?   How would those powers give them an advantage, and how does one mitigate those advantages?  What are their weaknesses?  Do those weaknesses make sense within the lore you have established for the story?  If you put everything together right, you have a world full of supernatural creatures that still feels organic and believable.
Posted by Brent Nichols at 5:07 PM