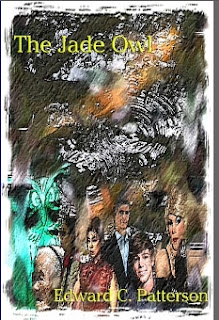 “We are Guilinese,” Ao-ling said. “The Jade Owl is my family’s heirloom, but it did not originate with the Xiao family. In fact, it has been the Xiao family’s curse. It was never ours to keep.” Her eyes opened wide. She leaned toward Rowden. “It is never anyone’s to keep.”

The Jade Owl is a remarkable adventure novel about five people on a quest through modern-day China for an ancient artifact with mystical powers.  Nothing less than the integrity of space-time is at stake, and the fate of us all is in the hands of one of the most fascinating groups of mis-matched heroes imaginable.  There is a professor, a kung fu expert, a scholar, a drag queen, and an artist.  As they search for the owl they are pitted against ruthless, powerful people who will do anything to get it.

The Jade Owl is a fascinating adventure story, and it is beautifully written as well.  Edward Patterson holds an MA in Chinese history, and the depth of his knowledge comes through on every page.

There are four books in the Jade Owl series, but this one works as a stand-alone volume.  All of them are available at half price through the end of July.

Read The Jade Owl
Posted by Brent Nichols at 9:18 AM