Book Review - In Our House 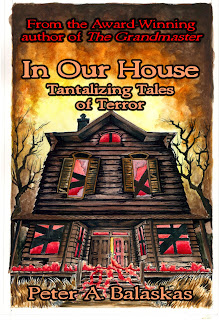 In Our House is a captivating, fascinating, thought-provoking and thoroughly entertaining collection of eight short stories from award-winning author Peter Balaskas.  If you had to assign a genre to the collection it would be horror, but the collection is much too complex to classify easily.

If there is a recurring theme running through In Our House, it's an exploration of the nature of a man, the choices we must make, for better or for worse, because of what we are, and the consequences we may face as a result.

Duet begins the collection, the least-spooky story in the collection.  The narrator is a writer.  His art is fundamental to who he is.  But in order to create, he may have to destroy the most precious relationship in his life.  She will not thank him if he keeps her around at the cost of his life's work.  He must make an impossible decision, and the results are... unexpected.

Auld Acquaintances, Id, and Wash Cycle are more ordinary.  In these three straightforward horror tales a thoroughly bad person gets his comeuppance.  Each story involves a man trapped in some way by his own nature.  One man can no longer keep his darker nature suppressed.  Another man, after a long life of cruelty and corruption, must finally pay a terrible price.  They are entertaining, if not deep, and if I had stopped reading there I might have been disappointed in the collection.

The stories veer into deeper waters, though, with Crossing the Styx.  Martin is a healer.  It's what he does; it's who he is.  He helps the living cope with the aftermath of tragedy.  Then he finds a very special victim, one only he can help.  How can he refuse, when the price he must pay is so small?  But others come.  Their need is great.  The price is rising, but how can he turn them away?  Martin is going to find out just exactly how much one man can give.

WIth In His House, the collection veers into allegory.  An artist is trapped in a house, surrounded by a tempest, afflicted by some very strange housemates.  It's all real... in a way.  Only a profound journey of self-discovery can set him free.  It's a tense and deftly-written story, and it packs a tremendous emotional wallop.

These stories will stay with you long after you're done reading them.  Don't miss In Our House.
Posted by Brent Nichols at 8:55 PM