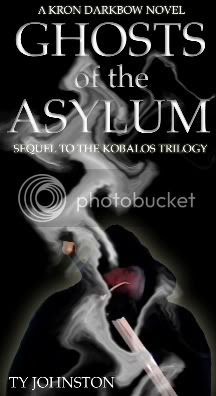 Today I have a guest post from an author I respect and whose work I enjoy, Ty Johnston.  Take it away, Ty:

Fantasy author Ty Johnston’s blog tour 2011 is running from November 1 through November 30. His novels include City of Rogues, Bayne’s Climb and More than Kin, all of which are available for the Kindle (http://www.amazon.com/Ty-Johnston/e/B002MCBQRU/ ), the Nook (http://www.barnesandnoble.com/c/ty-johnston ) and online at Smashwords (http://www.smashwords.com/profile/view/darkbow). His latest novel, Ghosts of the Asylum, will be available for e-books on November 21. To find out more, follow him at his blog tyjohnston.blogspot.com.
As a writer, lots of different authors have influenced my own interests, writing style and favorite genres. From Alexandre Dumas to Stephen King, Leo Tolstoy to Max Brooks, Homer to Ed McBain, my list of favorite authors could be quite extensive.
But for the most part, I write fantasy, usually epic fantasy. This brings up the question, which fantasy authors have influenced me the most?

Like many youngsters who were readers growing up in the 1970s, I took my first bite of fantasy literature with J.R.R. Tolkien’s The Hobbit, following it up soon after with The Lord of the Rings. For my generation, many got their start with Tolkien and his tales of Bilbo and Frodo.

Growing up, I did not have much access to fantasy, so discovering Tolkien was eye opening. I was transported away to a land where even the least among us could at least try to accomplish great good. For the 7-year-old me, that was heady stuff.

Soon after, as I neared my teen years, I discovered Sword and Sorcery literature through the Thieves’ World anthologies of short stories, edited by Robert Asprin and later co-edited with his then-wife, Lynn Abbey. Again, my eyes were opened, this time to a much more gritty version of fantasy, one that seemed much more adult to the young me.

At this point, I was thirsty for more fantasy fiction, but there just wasn’t that much available in the town where I lived. That changed in 1983 when a local book store began carrying the Dungeons & Dragons games. The games were popular, and right away the store started selling more and more fantasy literature. This is how I discovered Fred Saberhagen and The First Book of Swords, and soon after Margaret Weis and Tracy Hickman’s Dragons of Autumn Twilight. These two novels were each the beginning of a separate series, so I had my reading cut out for me for some little while.

One element I’ve always enjoyed about Saberhagen’s writing, and that of Weis and Hickman, is the prose was not overly flowery. They told their stories with lots of characters and lots of action, and they didn’t take a thousand pages to do so. I strive for much of that in my own writing to this day.

So far I’ve outlined the majority of my early fantasy reading. I left out a handful of authors, some of whom I quite enjoy, because I’ve never felt they had a major influence upon myself as a writer. But I have to mention Michael Moorcock and Fritz Leiber, two astounding authors who kept my interest in fantasy going strong.

As I grew older, I began to read less fantasy. Actually, I began to read less in general, though I never stopped completely. For most of the 1980s and 1990s, my interests were drawn to horror, with the likes of Stephen King and Robert McCammon holding sway over much of my reading during this era. Also during this time, I became a huge fan of The Sandman graphic novels, written by Neil Gaiman, and found them an excellent mixture of fantasy and horror. To this day I consider it some of Gaiman’s strongest writing.

By the late 1990s, I was burning myself out on horror. I began to turn back to fantasy more and more.

I found I had a lot of catching up to do, as I had missed a lot of the newer fantasy authors who had come along during my dry spell.

When I dipped back into fantasy, I started with R.A. Salvatore, mainly because he was such a popular writer. The first book of his I read was Homeland, and I still enjoy that novel. Since then I’ve read about a dozen of Salvatore’s books, some I like and some not so much, but I still like much of his writing style.

More recently, in the last few years I’ve been turned onto Steven Erikson and his Malazan Books of the Fallen. I’ve read the first 9 books in this 10-book series, and I’ve found much to love about each and every one of them. I think Erikson is overly long-winded and could use a strong editor, but he’s the only fantasy author who raises such strong emotions within me.

Also, over the last few years I’ve found myself turning more and more back to Robert E. Howard, the creator of Conan the Cimmerian, and the father of Sword and Sorcery literature. I read a fair amount of Howard when I was younger, but it was not until I was in my late 30s that I truly appreciated how gifted a writer he was. I wish there was more material by the man, as I’ve read just about everything of his I can find, and that includes a lot of short stories outside the fantasy genres.

Stephen King continues to hold my interest, though I think his novels are a little more hit-and-miss than they were a couple of decades ago. While I don’t find it perfect, I did quite enjoy his series The Dark Tower and its mixture of epic fantasy, horror and even science fiction.

That about wraps my list for fantasy authors who have had a major influence upon me. You might be surprised at some names that are missing. George R.R. Martin comes to mind, as does Brian Jacques. To be honest, I’ve yet to read those authors. I have several of their books, but I keep putting them off because there is so much out there to read, within and outside of the fantasy genres.

But I’ll get to them. I promise. I’m always looking to discover great authors.

Posted by Brent Nichols at 8:12 PM